Do you know which female animal can count till 10?

Keep scrolling to know it all!

A female elk knows how to count till 10.

When female elks are given a choice to choose between a male elk having 10 antler points and the other having less than 10 antler points, she mostly chooses the one with 10 points.

What Do You Call a  Female Elk Actually?

Female elk are called cows. While males are called bulls. They are large-sized animals with a four-chambered stomach.

Elk eats vegetation like grass and plants. They have a thick coat that helps them survive in winter.

And in summer they eat so much food and they eat constantly to gain fat that they surprisingly eat up to almost 7 kilograms of vegetation on a daily basis.

Well, A female elk is mainly called a cow. In Asia, people also call them stag (for male) and hind (for female). You can also call her a red deer due to its color.

However, the native American Indians call elk “wapiti” which was mainly originated by Shawnee Indians who were migrating from the East to Midwest.

Many people call them Moose because they find it difficult to differentiate between elk and moose due to their resemblance.

Cow elk’s sound is a medium level sound that is often produced to call other cows, bulls and calves because the majority of elk gangs consist of female elks.

But male elk’s sound is called buggle and this is produced when they are ready to mate and to make other animals acknowledge their presence.

When you hear a monstrous buggle then don’t think it will be produced by a huge elk because loud buggle is often produced by small elk.

Other sounds which they produce are chuckle and glunking.

They are one of the largest mammals like moose. According to many people, males weigh around 550 kilograms while females weigh about 250 to 300 kilograms.

But it varies from elk to elk. One thing that remains constant is that even female elk are bigger than deers and considered huge.

These species of elk are much darker in color as compared to other species. They have dark brown necks and sometimes they have black necks with a tan body.

Their antlers grow bigger than a normal elk. Female Roosevelt elk weigh about 700 pounds which is 317 kilograms.

Irish elk were also known as giant deer or Irish deer, they got extinct many years ago.

People found their skeletons, they are believed to be the largest elk ever lived. People say they went extinct because their antlers became so large that they could barely keep their heads up and got entangled in the trees.

People later found their skeletons and now most of them are for display in different museums. 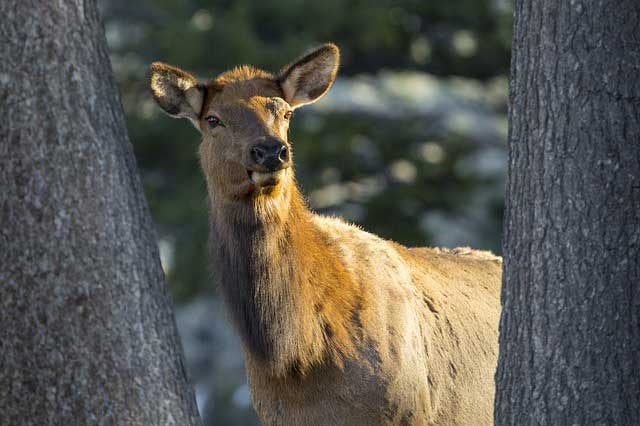 How Can We Identify Elk is Male or Female?

Nice question though! You can easily differentiate between their genders because the males have antlers while females don’t.

Males are larger in size as compared to females. But bull calves can look a lot like the females throughout their first year because they do not grow antlers until their first following spring.

So it will be a little tough to differentiate between them and you have to be careful while hunting because in most of the states females are not allowed to be hunted.

What is a Group of Female Elk Called?

A gang of elk. Yes, you got it right! They usually travel in groups and these groups are called herds or gangs.

The males and females usually have different groups, and the female ones are run by a female. The herds can consist of about 400 elks.

There used to be so many elk but with time people killed many of them and now we do not get to see as many of them as we used to.

However, you can find a wide range of them in North America.

What is a Male and Female Elk Called?

Elk is ruminant which means they have four-chambered stomachs that allow them to digest large quantities of plants and vegetation which is nearly indigestible for other animals.

Elk is red-brownish in color with a small tail.

Do Female Elk Have Horns?

Actually, Elkhorns are called antlers. Elk cows do not grow antlers and this is a key to differentiate between them but they adore the male elk’s antlers.

The males grow new antlers each spring and shed their old ones. Elk cows are smaller in size than bulls and baby elks do exactly like female elks because they also don’t have antlers.

Hopefully, now you know what is a female elk called. They are basically called cows but both male and female elk have some different names in different countries.

Female elks are the majority of the time present in any elk gange. They live in groups and these groups are called herds.

These herds sometimes are segregated by gender but a gang of female elk is always run by a female elk.

If you are planning to encounter a female elk then don’t underestimate her only because she is smaller than a male elk.

She can be equally dangerous so maintain your distance from her and don’t feed her anything.